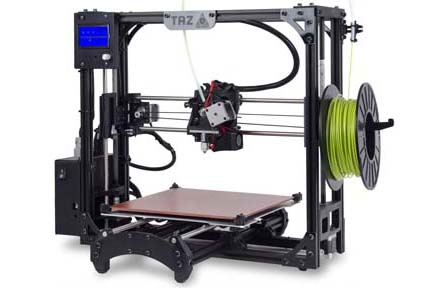 The Lulzbot TAZ 5 is a decent 3D printer that gets the job done. But if you’re interested in this, you should certainly take a look at the Lulzbot TAZ 6 as well.

So you’re in the market for a mid-range printer. It’s a tricky place to be – there are overpriced models everywhere, and it can be tempting to just pay more for features that you don’t actually need. Luckily, we’re here to help by openly and honestly researching 3D printers so you don’t have to.

Today we’ll be looking at the Lulzbot TAZ 5, a favorite amongst 3D printing hobbyists. Because the TAZ 6 has been released, the price of this model has dropped significantly, so there’s never been a better time to think about whether it’s right for you.

Looking at it, there’s nothing particularly fancy about the TAZ 5’s design. It’s an open printer, which allows you greater freedom in terms of the things you create, and with such a large build area, the only real limit is your imagination. The only main difference between this printer and others is that it uses 3mm filament instead of standard 1.75mm.

There’s a single extruder included by default, but you can also add a second to help speed the process up a bit. An intriguing point: the hot end is entirely metal, meaning you can print with carbon fiber or wood-infused filaments right out of the box. This is fairly rare, even among high-end printers, so it’s a neat feature to see.

The print bed itself is made of PEI, so there’s no need to use tape or adhesives to keep your prints in place. We were pleased to see that Lulzbot offer region-specific power cables too, so you won’t need to mess around with converters to get it working.

The TAZ 5 has three different printing settings: fast, normal, and high. Even on high, layers can be distinguished, although otherwise, quality is pretty good. Edges come out crisp and clean, albeit with a few wisps of extra material here and there.

Really, the only problem is that this isn’t the most precise printer around. If you’d like to create objects that connect to one another or complex parts like gears, you’ll likely have to do a little post-processing. Sometimes holes and mechanisms are a little smaller or larger than expected, which can lead to complications.

We were pleasantly surprised by the number of supported filaments, however. Normally, you’ll find only a handful work, but the TAZ 5 gives you more flexibility than you’ll probably ever need. As such, it’s equally good for beginners and experienced users looking to learn more about 3D printing.

This printer can be controlled directly from the PC, or by using the small LCD display. You can also choose to import models via a USB stick or SD card if you’d like. You might expect to see some kind of WiFi support in this price range, but it’s not a necessity.

It comes with a Lulzbot-modified version of Cura, so you don’t have to spend anything extra on software unless you want to. This software can be manually installed on Windows, Mac, and Linux devices, so there’s really no system that it won’t work with.

This version of Cura makes it incredibly easy to get started. It can recommend temperatures and suggest the best filament to use for a given model, among other things. Too much of 3D printing is consulting guides, so by skipping this step, the Lulzbot TAZ 5 makes it easier to get into the action.

This printer has had its price cut by hundreds of dollars since the release of the TAZ 6. It now retails for around $1650, which is pretty reasonable considering how versatile it is. The parts required to add a second extruder cost less than $20, too, so there’s very little reason not to pay a little extra.

It’s pretty clear that this isn’t intended to be bought as someone’s first 3D printer. Even though it’s easy to use and user-friendly, the cost alone is enough to cut entry-level users out entirely. If you upgrade from a low-budget model, however, you’ll find that the TAZ 6 expands your horizons massively.

You’re not limited to just using Lulzbot filaments, either (although they are pretty cheap). As long as it’s a 3mm material, and you can get the extruder hot enough, you can print with just about anything. Evidently, there are huge differences in price between materials and brands, but you can keep costs reduced by opting for reputable third-party suppliers.

With a year’s limited warranty on the printer itself and reasonable coverage periods for accessories, Lulzbot actually takes pretty good care of their customers. You can choose to extend the warranty by up to three years, although there are some pretty hefty costs involved.

Lulzbot’s site offers extensive and detailed manuals, tutorials, and tips for new users, too, so it’s a good place to learn the ropes. There are a good number of communication options, and the website even lists the company’s shipping address, although it does say that unless you go through the support team first, they’ll ship your printer right back to you.

Our only complaint is in regard to the repair service. You’re billed $50 just for the technicians to take a look, and then a further $35 to have the printer returned. This second fee can be waived if you pick it up onsite in Colorado, but the first fee is non-negotiable, and we feel, a little too high.

All in all, the TAZ 5 represents good value for money. Sure, it’s not going to hold up to any kind of commercial use, and the prints could be a little higher in quality, but for a mid-budget printer, it performs exceptionally well. The metal hot end and extensive filament support are rarely seen in models at this price, so kudos to Lulzbot for including them.

As long as you take good care of this printer, it’ll take good care of you. Everything you need to get started is either in the box or on the website, so whether you’re an expert or a complete beginner, the Lulzbot TAZ 5 makes it easy to get up and running quickly. 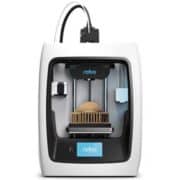