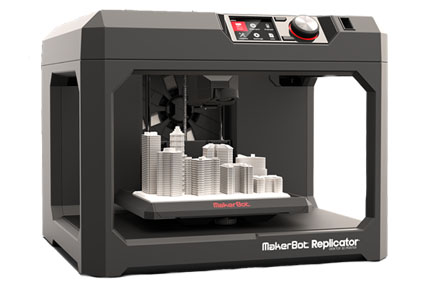 Historically, MakerBot has made 3D printing easier and more accessible to new users. That said, the 5th Generation Replicator is an average printer at best, and grossly overpriced at worst.

MakerBot’s Replicator is among the top well-known 3D printers on the market. There are various different versions available, but it goes without saying that some are better than others. Today, we’ll be taking a closer look at one of the lesser-known models – the Replicator 5th Generation.

We’ll be keeping an eye out for any strengths or weaknesses this printer might have. Who knows – while it’s been replaced by the Replicator+, maybe it has benefits that later models don’t. You’ll have to read our full review below to find out.

It’s easy to be intimidated by the large, looming frame of the 5th Generation. However, it’s designed to be accessible and easy to use. Take the chassis, for instance. It’s built to accommodate an enclosure, in case you’re having difficulty maintaining a consistent temperature during a print.

Of course, because of the printer’s size, the build area looks relatively small. In actuality, it’s larger than most, except for when it comes to depth. Still, there’s a lot of potential here, especially if you’d like to print models larger than most 3D printers will allow.

Let’s be clear: this printer is probably too big for your desktop. It’s pretty clearly designed for professionals, so you’re really expected to have a designated printing area set up. Since the extruder can move up to 150mm/s, you can expect it to be a little louder than most, too.

Overall, the Replicator 5th Generation has average-to-good print quality. We were a little underwhelmed by the 0.5mm minimum layer size, but for general day-to-day printing, it’ll do just fine. The problem is that this printer is intended for experienced users, yet offers very little to draw these people in.

For instance, you’re limited to PLA filament. We’ve seen open-source, $200 printers that can handle more materials than this one, and for a company like MakerBot, that’s just embarrassing. Its speed might have helped redeem it, but 150mm per second hardly makes it the fastest printer around.

For what it’s worth, it does replicate models pretty well. Mechanical gears, for instance, rarely need any post-processing in order to work properly. That said, at this price, you really expect it to excel in some way, and that’s simply not the case.

It’s not all bad, though. The LCD screen is an absolute joy to use, with clean, well-organized menus and a control dial to save space on the unit itself. There are even WiFi capabilities so you can print while away from the machine. There’s also the option to print from a USB stick, but not an SD card.

We’d be remiss if we didn’t mention the smart extruder. The Replicator series claims to be the only range of printers with a hot-swappable extruder, meaning if one stops working, you don’t have to halt production. It’s also more reliable than traditional extruders, which can only be a good thing.

The print bed, unfortunately, isn’t heated. This means that you’ll be relying on tape or other sticky surfaces to keep your prints stable. We were pleased to see that there is an automatic leveling function, though, so you don’t have to waste time getting set up for a print every single time.

So far, the Replicator 5th Generation sounds decent for a mid-range printer. There’s an issue, though: it’s priced like a premium one. While it’s no longer available directly from MakerBot, it retails on third-party sites for around $2000. Even after a couple of years, this price stays too high to be viable.

On the plus side, PLA is about as cheap a filament as you can get. You can actually use a third-party filament, but you might have to download a user-created print mode in order to do so. It’s a bit of a shame: if users can build these on their own, MakerBot could easily have just included them as standard. Of course, this would hurt their bottom line, so they didn’t.

The Replicator 5th Generation really struggles to justify its high price. It has decent performance across the board, but nothing particularly stands out about it. If you’re a collector or 3D printing enthusiast, by all means, buy one, but most people can find something better at a lower price.

MakerBot’s website has tutorials and support for all of its printers… except for the 5th Generation. If you need help, you can search for general information using keywords, or you can call them on the phone during office hours. There used to be email support, but we’ve heard reports that they no longer reply.

There’s a little confusion regarding this product’s warranty, too. In the user manual, it claims that the 5th Generation is covered by a limited warranty and links to the terms. However, while most other printers are referred to specifically, there’s no mention of this one. You should still qualify for some kind of third-party warranty, but it might be worth trying your luck regardless.

This simply isn’t good enough. Even for a model that’s no longer actively sold, users should know up front if they’re protected should something go wrong. While we can overlook this from smaller manufacturers, MakerBot has the money and legal resources to take better care of its legacy customers.

Not the MakerBot 3D printer that you want? Check our review about the MakerBot Replicator 2, this one might be the one that you’re looking for. 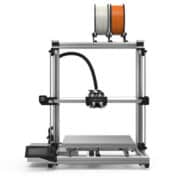