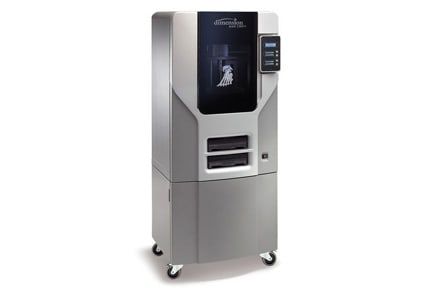 A niche printer, the Dimension 1200 promises high-quality prints for those that can afford it. However, its lack of progressive functionality casts a shadow over its otherwise amazing performance.

If you work in the medical or aerospace department, you might benefit from the faster prototyping and flexibility that a 3D printer offers. However, not just any will do: for these industries, you’ll need a highly specialized printer. Bad news first: these are usually very pricey. Good news? We’ve found one that might be suitable.

We’re talking, of course, about the Stratasys Dimension 1200. This is a heavy-duty printer in every sense of the phrase, but is its performance as high as its price tag? Today, we’ll take a closer look to try and find out. Keep reading to see what we thought.

Let’s address the elephant in the room: standing 45” tall without the base, this printer is absolutely colossal. Setup is a two-person job since the Dimension 1200 weighs over 300lbs. Additionally, there’s just one extruder – something of a rarity in high-end 3D printers. However, with an enclosed (and exceptionally large) build area, maintaining a consistent temperature is easy.

We were pretty surprised by the lack of connectivity and limited OS support, too. There’s not even a USB port – everything has to be controlled via the Ethernet connection, and only Windows devices are supported. This is hardly ideal, particularly in the design sector, where Macs are more common.

There’s a small, neat control panel on the right-hand side. This allows you to select CAD files and make minor tweaks before printing. It’s a nice touch, but with even mid-range printers offering mobile app support, we have to wonder what the designers were thinking. After all, it’s not like this is a specially cheap model.

Say what you like about the aesthetics of this machine, it does an extraordinary job of recreating virtual models. Complex shapes are no problem, and the layers are all but imperceptible. If you value speed more than quality, you can slightly increase the layer size, but even this produces models to a higher standard than many other printers on the market.

Unfortunately, the Dimension 1200 supports only a handful of materials, all proprietary. There’s a more durable, ABS-based filament named ABSplus, as well as both water-soluble and snap-off support material. It seems as though Stratasys wanted to do one thing very well, rather than including half-baked support for as many materials as possible.

It’s hard not to be impressed here: there’s very little filament wasted, and finished models usually require very little post-processing. Evidently, this depends on what exactly you’re printing, but for prototyping, there are very few 3D printers that can match this one.

One of the things that takes the most time when printing is bed-leveling and calibration. Thankfully, both of these things are done automatically with the 1200, so you can spend more time actually getting work done. That said, there’s very little advanced functionality included, considering the price.

The Dimension 1200 uses RFID chips on the filament cartridge to help keep track of how much material is left. As long as you keep an eye on the reading, you’ll never run out mid-print again. On the other hand, this does mean that there’s no way to use third-party materials.

There are a few additions that really would have made this printer shine: we’re talking of course about greater connectivity options and increased OS support. There’s really no excuse for not including a USB port, or SD card slot, at the very least. It’s disappointing, especially when you consider how little they’d cost to add.

This is not a cheap machine. It retails for around $35,000, meaning it’s priced well out of the reach of the vast majority of people. Stratasys has instead focused on marketing to the top-level businesses in the world. It’s a good thing too because this isn’t the only cost you’ll have to deal with.

How much do you think a 56” spool of ABSplus costs? If we said almost $180, you’d think we were crazy, right? Well, it’s the truth. Let’s be clear: this is not a printer you’d use without a specific item in mind. To put it another way, for the price of two spools, you can buy a fairly decent, mid-range 3D printer.

Still, if you work in one of the industries that this model is designed for, the cost is likely not a huge issue. After all, ABSplus claims to be 40% more resilient than standard ABS and can be used to create everything from engines to tank parts.

To its credit, Stratasys offers a good selection of customer support materials. There are user guides, quick start manuals, and FAQs for all of the company’s 3D printers. You can also download the latest firmware patches here, but for some reason, the Dimension 1200 isn’t included. It may not be the newest model around, but legacy customers have the right to be supported too.

There are a couple of additional services that this company offers. Users can attend 3D printing seminars explaining how to use their products, and there’s even a recycling service for old cartridges.

A one-year warranty is included with all of Stratasys’ 3D printers, which is fine if a little underwhelming. For $35,000 you’d really expect to see a five-year guarantee at least. Customer support can be reached by email, phone, or live chat, although there are no details on whether it is 24/7 or not. 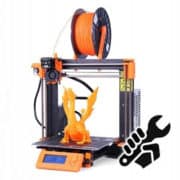