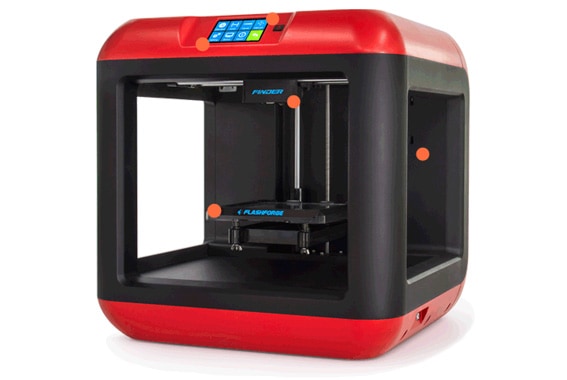 The Flashforge Finder is a nifty little number with compact features and a plug-and-plug simplicity that will regale all and any beginner. The PLA-only support and limited build volume do weigh it down a little, but it remains a strong contender as an ideal first purchase 3D printer.

Dubbed as an easy to use, safe, and affordable 3D printer designed for novices and children, does the Flashforge Finder follow in the company’s illustrious footsteps and fit this ostentatious bill? Nothing short of a resounding yes on our part, but let’s get into the details.

In keeping with its purported entry-level target market, the Finder dons a compact, yet sleek cuboid design with smooth contours and edges. The color scheme sandwiches a glossy black central shell with astonishing red top and bottom casing that also runs up the sides of the filled-in back panel. A series of tasteful blue LED strips also illuminate the build area.

The Finder is constructed through and through with quality plastic-alloy that respects Flashforge’s aim of providing a cost-effective 3D printer without skimping too drastically on quality. Plastic-alloy isn’t necessarily as desirable as a full aluminum frame and body, but given the Finder is open on all sides except for the back panel, the choice of material works and isn’t out of place.

The innards are concealed within the frame propping up the Finder’s prim overall look. The cabling and mechanical parts are all but invisible with this carrying over to the contained extruder casing. The Finder is comparatively small in 3D printer terms, but weighs a sturdy 27 lbs and holds its ground on any surface thanks to low-profile rubberized feet; in other words, portable with a rigid build.

Sticking to the tried and tested FFF technology formula coupled with the now ubiquitous XYZ Cartesian configuration, the Finder proposes a 140mm x 140mm x 140mm build area suited to novices who want a printer to cut their maker teeth. Don’t get us wrong, the build area is tiny compared to usual standards, but as with many features sticks to the ethos of the Finder.

A no-nonsense, direct drive single extruder takes charge of laying down filament with a standard 0.4 mm nozzle diameter capable of layer resolutions anywhere from a chunky 500 microns down to what we consider a remarkably detailed 100 microns if we take into account the price tag associated with the Finder.

The extruder moves the X and Y axes running on the usual dual rod setup, while the bed navigates the Z axis with a threaded rod and two smooth pilot rods. Nothing innovative here, but Flashforge are ensuring consistency by falling back on a proven configuration prized for its reliability.

In what is probably the most limiting feature of the Flashforge Finder, the printer only supports PLA filament with a standard diameter of 1.75 mm. If we were reviewing a printer sold at three times the price, this would be a huge negative, but in the case of the Finder, this lack of versatility is in many ways a positive. Beginners will appreciate the simplicity of only having to worry about using PLA (arguably the most straightforward material to work print with) and benefit from a printer wholly designed around it.

The filament cartridge is implemented into the build of the Finder via a vertical compartment located at the top of the back panel. Once loaded in the spool tray and clipped back into the printer, you wouldn’t know there’s a whole cartridge of PLA waiting to be used from merely looking at the Finder. Due to size constraints, it does limit usage to a maximum spool size of 0.6 kg but conversely protects the filament from environmental degradation from light, dust, and moisture.

PLA support is third-party so you can buy directly from Flashforge or save a few dollars and buy wholesale from an alternative vendor. Equally, if you have a stock of 1kg spools, you can print or buy a standalone spool holder which will work great with the Finder as well.

The printer is also fitted with a filament detection feature that determines how much material is left before a print begins and pauses the process to allow the user to exchange the filament cartridge.

The glass build plate is non-heated and as we aren’t dealing with ABS this isn’t a problem. In a further attempt to simplify the Finder’s overall functionality, the build plate is detachable thanks to a slide-in mechanism designed to facilitate the removal of finished prints and minimize inadvertent damage.

Although the Finder has no SD card slot, it makes up for this omission with Wi-Fi, USB-to-PC, and USB flash drive port connectivity. Additionally, the printer has an internal memory of 4GB to store print files. You can finish up a print without having to run a PC for the duration of the process, or run the printer completely untethered after sending over the print files through USB or Wi-Fi.

A 3.5-inch full-color HD IPS touchscreen adorns the top of the printer with intuitive smartphone-inspired controls. It allows the adjustment of a range of settings from homing and pre-heating the extruder to filament loading/unloading and triggering prints as well as monitoring the nozzle temperature and print progression.

Flashforge ships the Finder with its own slicing software called FlashPrint, which is among the most intuitive we’ve come across with settings suited to beginners and versed tinkerers alike (scaling, rotating, supports, resolution, cut, shell thickness, infill amount, 2D to 3D conversion, preset profiles, skirt/brim/raft).

The Finder is also compatible with your favorite third-party slicer such as Sli3er or you use software like 3DMax to generate STL and OBJ files to then port them over to FlashPrint. The printer is also ”Polar Cloud Enabled”, meaning it is compatible with Flashforge’s remote monitoring and printing features.

The FlashForge printer comes pre-assembled sandwiched in two thick styrofoam cutouts housed inside a standard cardboard box. Styrofoam trays sit in the chamber containing the various components that ship with the printer.

Unpacking is straightforward and the only real difficulty, if we can even call it that, is raising the bed plate to remove the final layer of styrofoam. Four zip ties secure the rods in place and are easily removed.

The instructions are clear and given the few small unboxing steps are more than enough to guide the wariest of first-timers.

As for hardware assembly, the filament needs loading into the cartridge holder, the filament tube fitting, and filament loaded into the extruder (after preheating). Again the instructions are clear and the process very easy. To finish off the hands-on assembly, we plugged in the power cord and adapter.

At this point we expected the printer to spring to life only for it to do nothing. A bit of curious prodding later we realized the button next to the LCD was the power button. The instructions made no mention of this, which slightly marred our overall experience of setting up the Finder especially given it is geared towards beginners.

Next, we had to level the bed using the in-built assisted leveling system, which couldn’t be easier. The printer provides clear instructions as to which leveling screw you need to adjust and by how much thanks to audio beeping cues. It took no more than five minutes and is entirely fit for a beginner with no levelling experience.

From our many journeys on various 3D printing forums, we established that updating the firmware was imperative before embarking on our first print job. Flashforge is continuously at work trying to better the software side of their products and users have recorded markedly enhanced performance by staying up to date with the latest firmware update. We followed suit.

Our first few prints with the Finder were nothing short of disastrous with the first layer continuously dislodging from the bed plate about halfway through each print. A little ingenuity and the use of a draft coupled with a good dose of either hair spray, builder’s tape, or the provided glue and the Finder sprung to life.

The quality of the prints is pretty marvelous if we consider the price of the Finder. We noticed very few structural issues. There was the occasional blemish here and there, and a few layering discrepancies, but nothing that a bit of post-print sanding and TLC couldn’t fix. Overall, we are hard pressed to find much wrong with the prints once the Finder finds its groove.

Of course, the limited build volume did limit our ambitions somewhat, but given the printer is targeted towards educational and beginner markets, the chances are it is more than enough for most situations.

FlashPrint was a pleasure to use and the process for selecting a file, running it through the software, porting it to the printer, and triggering the print from the LCD was nothing short of child’s play.

Finally, we have to note how silent the Finder is. It is by far the quietest we’ve used.

The Finder has a standard 180-day manufacturer’s warranty, with the ability to boost it to 12 months via Flashforge’s illustriously named ProCare Extended Warranty, but you’ll pay handsomely for the pleasure.

As for hands-on support, the Flashforge support team is responsive and knowledgeable bolstered by a rich library of walkthrough videos, troubleshooting guides, and general learning material over on the company’s well designed and accessible web site.

A compact printer that works out of the box, the Finder is entirely geared towards beginners and curious students in an educational context. The setup is among the simplest we’ve come across, and the Finder earns points for breaking down assembly without dumbing it down utterly.

After weathering a few adhesion challenges (more than likely fruit of our ineptitude and a lack of clear instructions rather than the printer itself), the quality of the prints is high and reliably so.

In our estimation, the Finder is well worth the price tag and given its affordability is an ideal first printer for any budding maker eager for a soft and gentle introduction to the world of 3D printers.