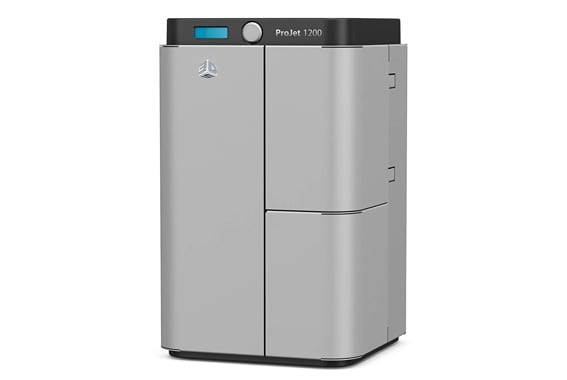 A stunning, precision SLA workhorse that consistently coughs up sublime prints. The price is prohibitive, but nothing an established design company or workshop can’t handle.

Behold the ProJet 1200; an expensive disaster or a refined SLA workhorse? Let’s find out.

The appearance of the ProJet 1200 is one that may deter those accustomed to the DIY ethos infused in budget kit form 3D printers due to its sleek all enclosed, professional look. A dual tone color scheme of glossy black and gray adorn the ProJet in its tower-like profile, making it very much at home as part of a design workshop or trendy office space.

The printer looks like a serious piece of kit, and we wouldn’t expect anything less from the associated price tag. It’s also a compact printer, no bigger than your average coffee machine and at 20 lbs matches in weight as well.

Two hinged doors allow access to the innards of the device and work well to seal in both sound and unwanted odors. The inside is a marvel of refined engineering with neatly placed components that are clearly of the highest caliber. The compartmentalized design means everything feels ordered and functional, as well as incredibly sturdy, and essentially, up to the task of producing quality prints.

In a departure from standard 3D printing practices, the ProJet 1200 uses SLA, or Stereolithography, whereby a batch of liquid plastic resin is molded or cured layer by layer into a 3D model when it comes into contact with a UV light source. The photopolymers that make up the resin react with UV light through a photochemically induced process that hardens it.

As is standard with SLA tech, the print bed sits the top of the printer, and as the curing of the layers takes place, it raises upwards to reveal the print job. Equally, the technic is by far the cleanest technique for 3D printing with very little mess or waste.

SLA is usually reserved for 3D printers much higher up the price pyramid and generally found in state of the art labs producing extremely precise prototypes before mass machined manufacturing, casting, or molding begins. With the ProJet 1200, 3D Systems brings the technology to the average consumer, opening a whole new world of what is the gold standard for quality in the 3D printing sphere.

The ProJet 1200 proposes a compact build area measuring in at 43 mm x 27 mm x 180 mm, which by 3D printing standards is tremendously small. 3D Systems has opted for such a small build volume because the printer is geared towards small, precision prototyping rather than larger ornamental models. It’s one of the downsides of the ProJet 1200, but one that’s in keeping with 3D Systems’ desire to ship a high-precision consumer model ideal for the hobbyist jeweler or engineering prototyper and even dentists.

The printer can reach layer resolutions of 30 microns with a native resolution of 56 microns, hinting at how precise this machine can be. Vertical build speed comes in at a very respectable 14 mm per hour. It also has a built-in UV curing station that sits adjacent to the build chamber for post-production refinement and cooling. Bizarrely, the station is somewhat smaller than the build volume, which seems like a substantial oversight on the design end.

The upside down build plate has scars and imperfections for added adhesion and therefore requires no special glue or tape for models to stick, although it must be clean for the UV light mechanism to perform properly.

The array of materials the ProJet 1200 is staggering: Polypropylene, ABS, Nylon, Ceramic, Metal-based materials, and more. All these come in a range of colors. Resins come in cartridge form and are unfortunately closed-sourced meaning you can only obtain them directly from 3D Systems. The cartridges are, however, easy to install and remove by sliding them in and out of a berth below the resin tank. They do cost quite a bit to buy, but the ProJet 1200 is reasonably economical with the resin and its possible to get up to twenty models from a single cartridge.

As for connectivity, the ProJet 1200 offers links to a PC via USB, ethernet, and Wi-Fi. On-screen controls are managed by a double-line LCD screen that provides information about what the printer is up to: ‘’initializing’’, ‘’waiting’’, and so on, but nothing too substantial in terms of options.

The printer works with 3D Systems own Geomagic Print that has an inbuilt STL verification feature alongside support creation, slicing tools, and the plethora of tinkering options you’d expect from this type of software. There’s no support for third-party slicing software. Geomagic Print is only compatible with Windows, so Mac users won’t, unfortunately, be able to make use of the ProJet 1200 at all.

The ProJet 1200 comes well-packaged in a heavy duty cardboard box with an inbuilt handle feature for easy removal. The printer itself is housed in a generous helping of styrofoam cutouts that in our estimation can withstand the ruffle and tumble of even the most tumultuous shipping journey.

Although the ProJet 1200 comes fully assembled, it does require some installation, namely fitting up the curing bulb and print platform. The process itself is straightforward and well documented, but the precautionary steps such as wearing protective gloves, using a lint-free paper towel, and not being allowed to touch the bulb are a little finicky for our liking. The whole process does, however, take no more than 10 minutes.

We then had to create an account with 3D Systems, which allowed us to register and obtain a link to a login page. Once logged in we received a  download link for the Geomagic Print software and access to help guides and the like. Booting up Geomagic Print also requires another login step, which felt somewhat superfluous and another hoop to jump through before we could gain full access to the printer.

We understand 3D Systems’ closed product circuit, but it did feel overkill and not one we would have expected pulling the ProJet 1200 out of the box for the first time. Equally, the fact the printer can’t be carried around with a cartridge fitted for fear of damaging the innards put us on eggshells. 3D printers are notoriously precise machines but are generally able to withstand knocks and bangs relatively well. The ProJet 1200’s instructional manual, on the other hand, has us handling the printer as if it were a newborn baby.

Next, we hooked up the USB cable to the printer and PC, prompting recognition of the device and the installation of drivers, which went forward without any probllems.

The final installation step saw us once again don a pair of latex gloves and protective eyewear to fit the resin cartridge. The process of installing the cartridge is straightforward and involves feeding it into the cartridge pocket and clamp. We did have problems with Geomagic recognizing that the cartridge had been loaded and we had to push it in and pull it out a few times to get this feature to work.

In keeping with its stratospheric price tag, the ProJet 1200 produces prints to match. All the marketing talk about precision printing rings true. Our numerous tests came out flawless. The amount of detail is breathtaking on small objects.

We immediately saw the appeal for jewelry makers who need bonafide prototypes full of intricate details. The transparent resin variety is a treat to toy around with, and some of the print tests were so good we even got a few complimentary comments about how smooth, detailed, and generally stunning they looked.

SLA is by far the most quality-oriented 3D printing technique and is head and shoulders above any rival additive counterpart. In terms of SLA performance, the ProJet performed admirably rivaling other popular models such as the Form 1 + for example.

As for 3D Systems’ Geomagic Print software, we had a pleasant experience using it. Loading an STL file, scaling it to size, letting the program auto-generate supports, and perform a few changes was intuitive, yet powerful enough to scratch out tinkerer’s itch. It has a lot to offer, and that’s a good thing.

The only real issue we had with the print quality was the limited scale imposed by the small build plate, but then again we very much come from an additive background where larger models are common currency. As a word of caution, don’t expect to be busting out imposing figurines or models with this printer.

The curing station also works amazingly: dip a finished model into an alcohol solution, lay it on the curing rack, press the button on the front of the printer and it takes care of the rest. The results were time and time again spectacular.

Sadly, 3D Systems has abandoned support for the ProJet 1200, so anything from the company is pretty much a no go. It did previously offer a full one year no questions asked warranty, but coverage now depends on the point of sale so check with them for full terms and conditions.

The ProJet 1200 is without a doubt a professional grade printer with the print quality to match. The SLA tech works well, and the ease of use ranks highly in our book. As a functional unit, the only real issues are the limited build volume and the fastidious aspect of SLA, which may not suit the average hobbyist.

In our eyes, the price tag and ongoing cost of supplying resin are too much for a home user but ideally suited to a larger enterprise where ongoing R&D costs are supplemented by a budget to match. If this resembles your planned usage, then it’s hard to go wrong with the ProJet if you need a detail-oriented SLA printer that’s fast, efficient, and reliable.