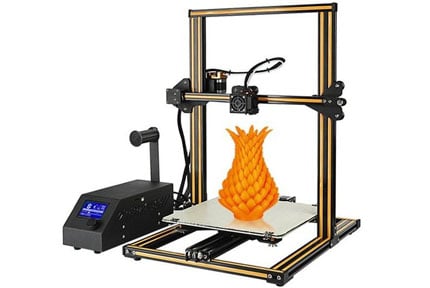 If you’re looking to get into the world of 3D printing without breaking the bank, choose the Creality CR-10. If you’re not great with tech, however, there are more user-friendly models available.

When it comes to low-cost 3D printers, there are a lot of choices. The problem is that some of them just aren’t worth your time. Maybe they’re just too small, or perhaps the print quality just isn’t up to scratch. However, there are some real diamonds in the rough if you know where to look.

Take the Creality CR-10, for instance. This comes to us from a relatively little-known company, and as a result, it hasn’t seen as much success as some of its entry-level rivals. Today, we’ll be taking a closer look at this model to see if it’s right for you and your high standards.

First things first: this printer has an open design. Better still, though, it has one of the largest build areas we’ve ever seen on such a low-cost product. After all, just because it’s for beginners, doesn’t mean you have to put up with only being able to make tiny prints.

You can control this unit either directly from the PC, or by using the microcontroller. We’d advise using the computer whenever possible, though, since the controller can be a little tricky to get to grips with. There’s also the option to import models from an SD card if you choose.

Now, as you might expect, there’s just one extruder. The print speed isn’t exceptional either, but at this price, it’s difficult to complain too much. Suffice it to say, you’ll spend a little extra time on each model, but the crucial thing is that they come out looking especially great. So do they?

Actually, yeah. Now don’t get us wrong – you’re not going to be creating extremely complex models, but for day-to-day use, it works surprisingly well. Edges are generally sharp and clean, and there’s a good level of detail reproduction. Essentially, the CR-10 prints like something that costs twice its price.

One of the first things you’ll want to make is an enclosure. This printer supports PLA but can struggle to maintain a consistent temperature for ABS filaments. Enclosures are very simple to make, although they’ll have to be assembled in parts. It’s worth it, though, as it greatly expands the number of things you can do.

You’ll find that there can be some layer skipping, and occasionally, you’ll notice visible stepping between the layers, but overall, this isn’t a huge problem. Just bear in mind that this is very much a hobbyist’s printer – not one for commercial use.

The CR-10 comes with a heated glass print bed, but you’ll have to manually level it. There’s also no software included, so you’ll have to find that for yourself. We recommend using Cura – it’s free and ranks among the most popular 3D printing applications. If you look, you can even find a settings profile for the CR-10.

Unfortunately, there’s no WiFi compatibility. Admittedly, this is usually only found on higher-end printers, but it still would have been nice to have. With a little extra investment, you can add this functionality, but you should know that it’s not included as standard.

The CR-10 is pretty barebones. You won’t find many advanced features or functionality out of the box. However, it’s important to remember that it is a low-cost model and intended to help familiarise you with the basic elements of 3D printing. Besides, you can always upgrade when you outgrow it.

The Creality CR-10 retails for around $400, so it’s one of the cheapest around. There is a weird quirk, though – Creality doesn’t actually sell it themselves. Instead, you’ll have to find a third-party retailer, each of which has their own warranty terms and support options. This seems designed to free Creality from any kind of obligation after the printer has been purchased.

We liked that you can use 1.75mm filament from any brand, though. Sometimes you’ll find that low-cost printers are more expensive to run due to their proprietary-only materials, but luckily, that’s not the case here.

The CR-10 provides exactly what it says it does: an inexpensive, powerful printer with minimal running and maintenance costs. Really, the only thing you’ll have to pay for is extra filament and possibly adhesive sheets for the print bed.

Now, there really isn’t much in the way of support. Creality have a brief FAQ section on their website, but there’s no mention of any warranty or support of any kind. Really, you’re relying on the retailer to provide a good enough warranty, which is a real shame since they’re unlikely to do any repairs for you.

The “Download” tab is very interesting. Its headings include “Firmware”, “Product File”, and “Model” but each of these pages is completely empty. As such, it falls to the user to find and install the correct version of any updates or software they choose to use.

This is a real shame. The CR-10 is an excellent printer for beginners, but there’s very little in the way of direction here. At the very least, we’d have liked a support ticket system, but sadly, this is non-existent. 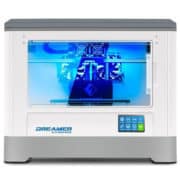