The Cube 3D printer is a hassle-free, classy all-in-one device ideal for those wanting to dip their toes into the hobby. The current low-cost outweighs the downsides of the proprietary cartridges and jamming issues.

Since the popularization of 3D printers, and give the inherent difficulty of 3D printing, there’s been demand for affordable, easy to use models that work out of the box.

3D Systems and the widely popularized Cube 3D printer strive to plug that gap. Does it live up the hype? Let’s investigate as we pull apart the secret inner workings of the most stylish printer on the market.

3D Systems is onto its third generation of the Cube with all the enhancements this encompasses. An all-in-one cube casing houses the printer, hence the name, and is advertised primarily as a user-friendly personal desktop model. With simplicity in mind, it aims to introduce first-timers to the world of 3D printing without the oft-complicated installation of entry-level DIY models.

Straight out of the box, the Cube is a piece of engineering bliss. Aesthetically pleasing, compact, classy, and dare we say, beautiful, it resembles a product distributed by Apple, where functionality and ease of use are as much a consideration as design.

The sleek white exterior panels are miles away from the functional, bare-bones design of plenty rival models. So much so that the Cube is very much at home sitting alongside other home office devices rather than confined to a workshop. The self-contained shell means keeping track of diverse components isn’t a factor.

The print area is a modest 152x152x152mm, providing enough working space for most small scale projects, especially for beginners trying their hand at 3D printing for the first time. With both 0.2mm and 0.07mm (200 and 70 microns) print resolution layers, the Cube offers a degree of versatility, but not enough to cater for a large variety of print projects.

The print head ensures the X-axis, while the PrintPad (read build plate) manages the Y and Z axis. The PrintPad is removable for easy cleaning in hot soapy water. Every print job requires the application of Cube Glue, a weak adhesive produced by 3D Systems that assists the printed filament to solidly in place on the build plate. It takes some practice to apply the appropriate amount, and you need to wait for it to dry enough or suffer the consequences as we did.

The Cube sports dual extruders for simultaneous double color or material prints housed in out of sight purpose-built plastic casings that sit inside the vertical outer side panels. ABS and PLA are the only supported materials, and the Cube only works with 3D Systems proprietary filament Smart Cartridges that come in a selection of twenty-three colors.

These are significantly more expensive than generic filament bought from a hobbyist retailer, which was a big con for us when assessing the Cube 3D printer. These materials are of a higher quality, ostensibly, to justify the higher cost. To give 3D Systems its due, the ABS provided is recyclable, while the PLA is compostable, which softens the blow for the environmentally conscious maker. The company also asks users to ship back empty cartridges for recycling.

Each cartridge includes its own integrated, snap-in nozzle, which it must be said, is incredibly simple to install and, in theory, foregoes the need to battle with removing debris and build up from the extruders every time. Two cartridges come as standard with each new device.

Connectivity through a USB port mounted on the bottom of the side casing (the package includes a USB flash drive) and a WiFi connection allowing the user to trigger prints from their computer or via a flash drive, gives options.

3D Systems have even designed a dedicated Cubify mobile app for both Android and iOS (plus  MacOS and Windows through the Cubify software) packed with printing ideas, blueprints, and guides. The software converts into the required file type and forwards the instructions to the printer. It cannot be used to design prints though.

The user interface, we love. Inviting and perfectly intuitive, it’s hard to go wrong using the in-built 2.5” color touch screen LCD. Beginners should find getting around the settings and options a breeze. Indicators such as how much material is left are welcome additions for users who might not have yet developed the skills to gauge how much filament a project requires.

For a 3D printer touted as an out of the box solution, the printing process was hit or miss. The first few prints went well, especially for smaller prints. The results were generally error-free and full of detail with smooth contours and layers with few flaws. Ghosting was all but absent.

However, the Cube starts to struggle with larger projects that more often than not end in a bundle of filament only good for the landfill. The waste is especially hard to stomach given the exorbitant cost of the cartridges. The Cube Glue did little to fix the issue but works well for smaller prints.

Overall, the Cube is ideally suited to small jobs and is relatively economical with the material when it works correctly. From what we can gather, the lack of a heated plate, and the fact the software didn’t factor in the need for supports worked to the detriment of larger prints that require stability and uniform heat distribution as vertical layers build up.

The Cube is loud, to the point that it can become an annoyance by reverberating into adjacent rooms. For such a little machine, the noise is disproportionate possibly due to clanks bouncing off the casing.

Where our opinion of the Cube shifted drastically was when we encountered systematic jamming in the jet on the print head. The problem appeared to happen after only a handful of jobs using a brand new cartridge. Either the filament reacts badly to being exposed and goes brittle, or warehouse storage is conducive to the chemical properties of the plastic to harden more than necessary while sitting in the cartridge. It was hard to tell.

Regardless, we have here a serious design flaw; feeding the filament through a tube doesn’t work well. Once a jam occurs, the nozzle does nothing but churn the plastic into a clumpy mess. If it isn’t a jam, the filament breaks inside the cartridge. There’s not much that can be done other than load in a replacement.

Speed wise, the Cube isn’t remarkable and gets the job done within acceptable limits.

Small prints can take anywhere from four to ten hours depending on the size, while bigger jobs were a bust most of the time, so we were never able to finish them to know how long the process takes.

The Cube comes pre-assembled and only requires the user to install the cartridges, a straightforward procedure. The Cube is packaged well and comes with a quick start manual, USB key, cabling, glue, spatula, plyers, power supply, and the printer itself.

The Cube self-calibrates by make sure the build plate is perfectly level and at the right distance from the print head via a set of magnets under the plate, although the device asks the user to tweak the plastic circular knobs below the plate as required. The instructions are straightforward and won’t daunt even the most unversed user.

That aside, the Cube allows you to be up and printing within 45 minutes after unboxing the device, unheard of for printers in this price range where hours of assembly are the name of the game.

3D Systems has discontinued the Cube, and the model is no longer in production, arguably due to lackluster reviews caused by the filament jamming issue.

Support wise, 3D Systems offers a 90-day warranty for parts and labor, but no refunds whatsoever due to discontinuing the product. Specific resellers may offer different refund policies.

3D Systems has a robust after-sales support service with a dedicated phone team that can help with the jamming issue by walking through a variety of detailed fixes. They’ll also walk through updating the Cubify software to the latest firmware which helps with printing problems to a certain degree. Alongside are forums, guides, and articles about getting the most out of the Cube.

The Cube isn’t a bad printer overall and produces some quality results for smaller projects. The design is the model’s strongest asset, and it’s hard to find fault with the look, feel, and ease of use (bar the jamming issue).

At a much-reduced price, the Cube is an ideal no-nonsense first time 3D printer for those who want to experience the joys of printing without the hassle and tinkering of similarly priced DIY equivalents. The dual extruder setup is also a bargain.

The cartridges are a downside, but if you buy them from a third-party, the costs are more palatable. There’s also a DIY fix for the jamming problem, which isn’t particularly difficult to perform and is an excellent way to introduce a beginner to the modification aspect of the hobby.

The Cube isn’t ideal, but its hard to argue with for the bargain price. 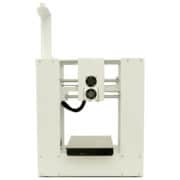