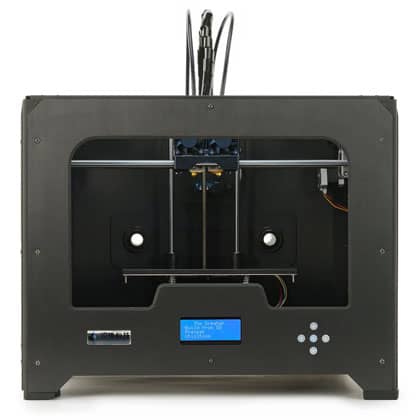 You can’t go wrong with the Creator X as it provides substantive enhancements on its predecessor and has the print quality to match. We do, however, recommend investigating its successor the Creator Pro, which continues Flashforge’s tradition of inexpensive, quality-oriented 3D printers.

The Flashforge Creator X isn’t purely a spiritual successor to the widely lauded Creator, but the direct successor, since superseded itself by the Creator Pro. Today, we explore whether the improvements warrant a purchase over the much-loved original and how the Creator X stacks up among the mid-tier 3D printer offering.

A first peek at the Creator X, and it’s hard to differentiate it from the original Creator: it retains the classic rectangular shape and additive FDM technology. However, this time around the frame and base plate have been upgraded to full aluminum rather than glossed wood. The change vastly improves all-around stability with added stiffness that reduces unwanted vibrations that can disrupt the printing process.

Although the side paneling remains wood, the fact it has minimal bearing on structural integrity and performs more of a protective enclosing role has no impact on rigidity. Small changes like new support wedge fittings in the corners of the frame and rubber feet on the bottom of the unit also help in that respect as well a firming up the notoriously wavering Y-axis.

Additionally, FlashForge has opted for a sleek black color scheme that is, in our opinion, far more attractive than the drab off cream coloration of the Creator. The same enclosed look is more or less identical to the original with that clean, ordered style returning to our delight.

Panels now cover the sides of the Creator X providing a substantial advantage when using ABS where ambient temperatures need to be higher and regulated. In a welcome attempt at a balance between using PLA alongside ABS, the front and top are open to allow good air circulation for escaping noxious fumes and lower temperatures required for PLA printing.

The design itself is unapologetically inspired (or stolen depending on how you see it) by the MakerBot Replicator series, and with good reason, given it’s proven to be one of the most reliable consumer 3D printing configurations around. FlashForge has imbued the Creator X with its unique flair, notably the presence of purple LED strips illuminating the print bed – a much-castigated feature missing from the classic Creator.

Arguably the best upgrade is the heated build plate which has been replaced by a 6.3mm slab of aluminum, which is considerably thicker than the original and makes the warping and leveling issues all but disappear.

Equally, leveling the bed is much easier thanks to the four-point leveling system being replaced by a three-point system and is far better at conducting heat. The plate also ships with a layer of Kapton tape, a thin polyamide film that aids adhesion.

The build volume sits at a respectable 225 mm x 145 mm x 150 mm and is identical to the Flashforge Creator.

As with the Creator, the Creator X incorporates the very same dual MK8 direct drive extruders capable of layer resolutions between 100 and 500 microns at print speeds of 40 to 100 mm per second. The nozzles have standard diameters of 0.4 mm. The extruder mount runs on the X and Z axes, while the build plate moves on the Y-axis. Both units are powered by the reasonably standard belted stepper motor arrangement on flush and threaded 8mm rods.

The Creator X is compatible with ABS and PLA exclusively with support for regular open source 1.75 mm filament. Dual spool mounts sit on the back of the printer connecting the filament to the tubing that runs up, over, and into the extruders.

The Creator X has an onboard dual tone LCD screen that helps with print initialization, bed leveling, and a variety of other settings. A five-button diamond to the right allows navigation through the menus. The LCD is identical to the one found on the classic Creator although repositioned slightly.

Connectivity is through USB-to-PC as well as an SD card slot for untethered use. Software-wise, the Flashforge Creator X runs on an open source platform and ships with ReplicatorG as a starting point with support for STL, Gcode, and OBJ file types. Programs like Makerware and Simplify3D work just as well though and may be a better option for beginners due to their ease of use and intuitive UI.

The FlashForge Creator X arrives well packaged with cardboard compartments containing the various accessories and components, a few foam wedges, bubble wrap, as well as cardboard buffers and trays surrounding the printer. The limited use of styrofoam stood well with us, didn’t jeopardize the printer during transit due to clever use of reinforced cardboard, and was a welcome environmentally conscious touch on Flashforge’s part.

Unboxing went well except for the filament spools sitting under the build plate that required a bit of smart build plate movement to dislodge.

Installation is involved but not unduly complicated and runs the gambit of printer assembly from cutting ties securing the X-axis and mounting the extruder assembly on the seat via a set of screws. Final steps include popping the spool holders into the inserts on the back panel and tightening the nut, fitting the guide tubes to the clips on the back of the printer and then to the holes in the extruder.

Next, we had to level the bed with assistance from the printer itself via the LCD. Flashforge ships the printer perfectly leveled, but transit more often than not dislodges the leveling. The leveling process is the usual choreographed back and forth fitting a piece of paper under the extruder and tightening the three-point leveling knobs.

No one ever scoffs at an auto-calibration feature, but given the price of the Creator X, the process was more or less pain-free and well within the abilities of even a first timer.

In comparison to the classic Creator, the Creator X produces superior quality prints mainly due to the improved print plate and accentuated stability from the full metal frame. Renditions were faithful, and we encountered no failed, or entirely, unsalvageable prints.

The dual extruders worked well when we tested with multicolored prints. Supports, when used, worked well particularly as the complexity of prints increased. We were generally delighted with how the printer performed.

There was the occasional issue with PLA prints not adhering to the build plate, but we found that regularly re-leveling the bed provides an instant solution to the problem. Similarly, the models aren’t perfect with the occasional blemish especially for flat surfaces and contours, but nothing that a little sanding didn’t fix.

Noise levels are a tad lower than the original Creator, but nothing too substantial and the Creator X remains in the middle of the pack when it comes to noise pollution levels.

Speed-wise, the Creator X is notably faster than the original thanks to the improvements mentioned previously, seating it in the middle ground of similarly priced FDM-based printers.

It’s worth considering that the Flashforge Creator X is now discontinued in favor of the Creator Pro, as such Flashforge no longer offers any direct support options for repairs and warranties. All its proverbial eggs are now in the Creator Pro basket, including support. The company does, however, still have an informative ”How To” series on its YouTube channel covering everything from unboxing to leveling the build plate.

Equally, finding a distributor that still stocks the Creator X is like searching for a needle in a haystack, and the chances are you’ll come across one on sites like eBay. As such, warranty coverage is at best limited and in most cases nonexistent.

Enthusiasts have created an unofficial manual that is a fount of help, walkthroughs, and information about the printer. It’s well worth investigating if you encounter issues with the Creator X.

Unlike many budget-to-mid-tier 3D printers and even the original, the Creator X doesn’t feel cheap or as if Flashforge has cut corners, and this carries over to the quality of the prints. For a $1000 printer, we can’t argue with the printing prowess of this nifty little number.

We recommend the Flashforge Creator X for beginners who want a bit of a challenge and are eager to learn how to level a bed and navigate open source software through trial and error. Veterans will find a lot of pleasure using the Creator X, if only for the awesome design, and even more so for how reliable this printer can be.

The only real downside is the lack of customer support and the fact that the Creator Pro offers even more upgrades and improvements. In terms of ongoing support and availability, the Creator Pro is the sensible choice with a plethora of great additions such as see-through acrylic paneling, upgraded rails, better cover plate, integrated LCD and a new acrylic top for ABS stability.

The chances of picking up a Creator X are slim not only because they are no longer manufactured, but mainly because their owners adore them and they quickly become central pillars of any hobbyist’s workshop, meaning few get sold second hand. 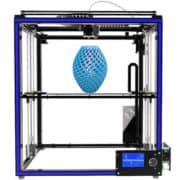