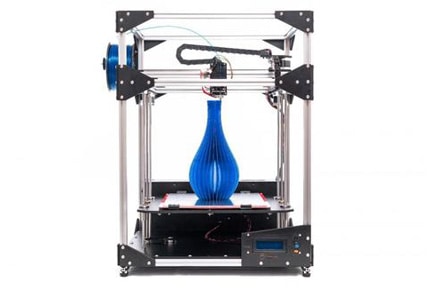 For casual or semi-professional use, the Folger FT-5 R2 stands alongside much more expensive printers. It’s large enough to print just about whatever you want, but is let down slightly by very limited customer support.

Here’s a dilemma: what if you want a 3D printer that allows you to build huge models, but also one that won’t leave a huge hole in your bank account? Tough luck, right? Wrong! We’ve actually found a printer that meets both of these criteria.

Today we’ll be taking a look at the Folger FT-5, specifically the R2 model. We’ll be examining this printer’s strengths and weaknesses equally, and trying to help you decide if it’s the right product for you. Alright, with that out of the way, let’s jump right in.

Unlike the R1, the R2 is made entirely from an aluminum composite. This helps keep the overall weight down, but also lends this printer a vaguely futuristic appearance. Overall, the structure is quite simple and shouldn’t take too long to assemble; even connected the heated bed and extruder can be done in a couple of seconds.

Understandably, given this model’s huge build area, it uses an open design. This is kind of a trade-off, though, since this makes it slightly more difficult to maintain a specific temperature. Further, given the size of this printer, creating your own enclosure is a little more involved.

Given the price of this product, you might expect the manufacturer to cut a corner here and there. Despite this, if they have, it’s not obvious where. The FT-5 R2 has everything from an easily removable spool to a small LCD screen for easier control.

We were actually surprised by how high-quality the FT-5’s prints are. There’s a good level of definition even at the fastest speed, and if you’re willing to slow things down a little, you can even print highly complex structures. Better still, there’s very little post-processing required.

Now, there is one slight issue: the FT-5 R2 can only print with PLA and ABS. This is to be expected of a low-budget 3D printer, but you’d expect a little more versatility from a mid-range model. That said, given the print quality, build size, and aforementioned temperature control problems, this is an easily-forgiven complaint.

Let’s temper our expectations, though. The FT-5 sits in the middle ground between hobbyist and professional-quality. It probably won’t be good enough for commercial purposes, but for small-scale production or occasional use, it’ll work just fine.

There’s a lot to like about the Folger FT-5, but not many of its best features are noticeable at first glance. Take the frame, for instance: it’s highly resistant to vibrations, meaning your prints should fail less often. There’s also the ability to use it with either a 110 or 220V input, which is fantastic for overseas users.

There’s no WiFi functionality, but there rarely is in this price range. Instead, you can move model files directly from your PC, on a USB thumb drive, or an SD card. You’ll also have to find your own modelling software, since there isn’t any included. However, with free options like Cura available, this isn’t much of a problem.

Finally, there’s the heated bed. This allows you to print without the need for adhesive tape, and actually helps prevent your models from warping during the print. See? There’s quite a bit of functionality built-in that isn’t instantly obvious.

At around $500, the Folger FT-5 R2 isn’t the cheapest 3D printer around. That said, it’s also far from the most expensive. Since it can be fully assembled in under an hour and doesn’t require any additional extruder heads, expensive filaments, or add-ons, there’s actually a fairly low initial time and financial cost involved.

PLA and ABS are two of the least expensive 3D printing materials around, so this model even has lower running costs than similarly-priced products. There’s no DRM, scanners, or proprietary mechanisms in place to drive the price up, either, which is fantastic.

Folger even offers a slight discount if you buy several of these printers. Would we recommend filling a warehouse with them printers and starting a company? Probably not, if only because there are higher-quality industrial printers available. However, for home use, the FT-5 is near perfect.

You hate to see it: a company with exceptional, reasonably-priced products and a poor support section. It offers a few frequently asked questions for some of its more recent printers, and guides with some troubleshooting tips, but if you have a more specific problem, you’ll have to contact the company by email. They do claim to reply within 48 hours, at least.

Strangely, much of this information is hosted on Google Drive instead of the company website. It’s unlikely that Folger had so much traffic that they incurred charges from their host, but either way, a Google Drive link gives the site a profoundly unprofessional look. Come on guys, really?

It’s not all bad, though: Folger offers a 14-day guarantee on each of its printers, ensuring a full refund if it’s dead on arrival. You can also return your product for any reason within two weeks, although you may be liable for postage costs. 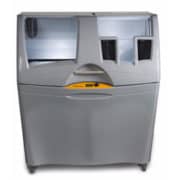