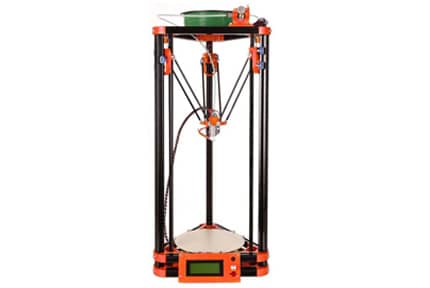 Overall, the Kossel Mini is a solid 3D printer that performs on par with other similarly-priced 3D printers. For the price, it’s a good enough choice and it’s open source as well!

There’s been a lot of talk about open-source 3D printers recently, but how do they hold up against specialized, usually more expensive models? To find out, we’ve researched the Kossel Mini – a minimalistic little printer with more than a few die-hard fans.

We won’t be going easy on it just because it’s cheap to build, though. We’ll be addressing any issues we encounter so you can decide for yourself it the Kossel Mini is right for your needs. Of course, the flip side of this is that we’ll also be giving credit where credit is due.

One of the great things about this printer is that many of the parts you need can actually be 3D printed themselves. You will still have to purchase the mechanical and metal components, though, but all in all, it has a nice, simple design. There are lots of construction guides too, so that won’t be an issue.

We’re big fans of the open design. This allows you to build larger objects without having to resort to combining several smaller discrete parts. You should note that as it’s a vertical build area, you’ll probably have to build more supports than with a traditionally-shaped build zone.

There is only a single extruder, but it moves very quickly: up to 320mm/s. For comparison, that’s about 33% faster than some premium printers we’ve covered in the past. Because of the open-source nature of the project, you can also upgrade it extremely easily.

The print quality is about what you’d expect from a low-end 3D printer. For the most part, models come out looking decent, but certainly not what you’d call professional-level. For instance, the layers are clearly visible and there’s often a little excess material left hanging. However, this printer is highly customizable and you may be able to reduce these issues with a little tinkering.

There’s support for a good range of materials, including exotics, which is great to see. Remember – most Kossel Mini kits won’t include a metal extruder, so if you want to print with exotic materials, you’ll have to pick one up separately.

We’d say that this printer is best suited to people looking to get into 3D printing as a hobby. It’s not quick enough for commercial applications, and it’s a little fiddly to get started with, but once everything’s set up, it’d make a great long-term project.

Because you have to build this printer yourself, there’s scope for all kinds of upgrades and add-ons. For instance, you can add a second extruder for far less than most companies charge. We’ve even seen heated print beds, like in the image above. The only limit is your imagination.

That said, the basic Kossel Mini is fairly limited in terms of functionality. It has a small microcontroller that you can use to set up a print, but you can also connect it straight to your computer. There’s USB stick and SD card support, but no WiFi, which is to be expected.

There is an automatic bed-leveling function, though, which takes a lot of the hassle out of starting a print. It might not be much in the grand scheme of things, but every second you save is a second you could be dreaming up cool things to create.

Since you buy this printer in pieces, the warranty provided will differ from one retailer to another. That said, you’ll struggle to find another 3D printer with as much freely available support information. Seriously – the Kossel site redirects to an extremely in-depth user guide with extensive documentation. That’s always a bonus!

We’ve also found that modification guides for the printer are easily found online, and there are even some quick additions you can print out yourself. Think about it: the Kossel Mini is a printer that (with your help) can actually improve itself over time.

While several sources suggest that the components for the Kossel Mini should cost less than $600, we’ve actually found kits available for around $190. When you consider that even the most basic 3D printer costs around $300, the advantages of open-source hardware quickly become clear.

Of course, what you save in cold, hard cash, you pay for in elbow grease. The Mini is a pretty complex thing to assemble if you’ve never done it before. That said, it shouldn’t take you more than a day or two, provided you bought everything you needed beforehand.

The other problem is there’s no official repair service. You’re saving money on the initial purchase because if anything goes wrong, it’s going to be down to you to fix it. If you’re the type of person that likes to experiment, you’ll likely love this. If not, well, maybe choose a prebuilt printer instead.

The Kossel Mini shows how good open-source tech can be. However, it might be a little too hard to build and maintain for novice users. 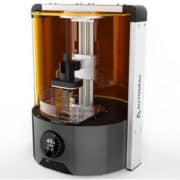