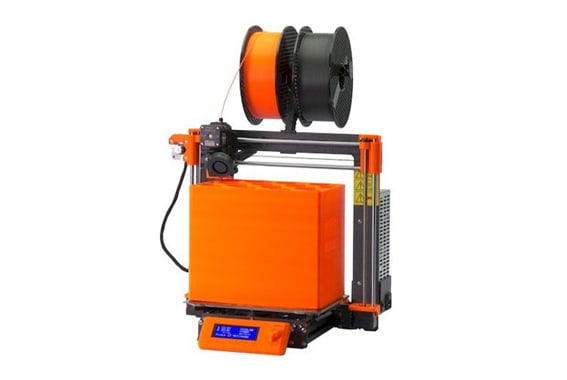 A worthy modern repetition of the RepRap project, this printer is among the best hobbyist models available on the market today. Easy assembly, an amazing company, and quality prints.

In many ways, the RepRap project was the catalyst for bringing 3D printing to the masses, extracting a traditionally expensive technique from the bowels of design studios with deep pockets to hobbyist workshops.

The ramifications brought on by the RepRap are still felt to this day. The simple tenets of self-replication and low prices through the competitive refinement of the basic RepRap design mean 3D printing has never been so affordable and accessible.

With so many RepRap inspired models on the market to choose from, we’ve focused on what is widely considered the most popular and revered RepRap printer, the Original Prusa i3 MK3S. Not only does this model equate to years of fine-tuning, but upholds the ethos of the original 2005 RepRap with self-assembly and low running cost.

Nearly fifteen years on from the original, let’s dive in and explore what the modern iteration of the RepRap has to offer.

Visually, it is a refined take on the DIY aesthetic bolstered by a rather alluring black and bright orange color scheme. The Original Prusa i3 MK3S looks like a hobbyist kit form 3D printer but without the rough edges or its innards unceremoniously exposed in a chaotic mess. The Dural milled frame, aluminum extrusions, and overall attention to design makes this one of the more attractive assembly kits out there, not to speak of its rigidity.

Side by side, you’d be hard pressed to find any surface similarities between the original RepRap and the i3 MK3S, but rest assured that many of these remain. Chiefly, retaining the core Cartesian configuration using Fused Deposition Modelling.

The build area measures 250 mm x 210 mm x 210 mm, which isn’t far off the dimensions of the original RepRap. Layer resolution ranges from 50 to 350 microns alongside a max print speed of 200 mm per second.

A single direct drive extruder with a Bondtech drive gear designed to grip onto filament on two sides (and an optical filament sensor) powers the printing process with a 0.4 mm E3D V6 nozzle that can easily be swapped for a bigger diameter if required. The alloy spring steel sheet bed with a PEI surface (meaning no glue, tape, etc.) is heated and removable, held in place by magnetic holds and fitted low corner temperature compensation tech to avoid undue warping.

Onboard controls come in the form of an integrated LCD with SD card reader with the option of Wi-Fi connectivity through an Octoprint interface. Software-wise, the i3 is designed to work with Prusa’s own Slic3r Prusa Edition or Prusa Control. The first being for advanced users who want tinkering options, while the second is for casual makers who favor ease of use.

The i3 also includes a whole host of small, but acutely smart features such as a power loss recovery mode that allows prints to resume even if the power cuts out, automatic mesh bed leveling, and 9 point calibration with skew axes compensation.

But, that’s not all; EINSY RAMBo motherboard that detects and recovers from skipped steps and layer shifts, sensorless X-Y axes homing, an array of temperature sensors and thermistors, and a fan RPM detector that shuts off the printer if it goes below a certain threshold to avoid damaging the extruder.

The Original Prusa i3 MK3S ships as a kit and as such requires full assembly. Don’t let this worry you though as we found the instruction manual (which ships as a hard copy with the printer) to be hands down the best we’ve come across with detailed color infographics, non-patronizing instructions injected with a welcome dose of humor.

The packaging is unsurprisingly excellent with a well ordered Tetris like arrangement of boxes and components. The protective material is ample and of high quality. We also particularly like that each of the boxes/bags/components is clearly labeled and linked to the instruction manual so finding what part to use next is wonderfully simple. Rest assured, the package includes Prusa’s now signature packet of Haribo candy.

It is also worth mentioning that the software setup was a doddle. We used Prusa’s Slic3r software, and it was up and running in no time. Interestingly, Prusa also provides settings for a bunch of third-party slicers like Cura and Simplify3D. The manufacturer could have only supplied settings for its software but decided to extend a helping hand to users even if they opt for other software. A nice touch in our book and illustrative of the whole ethos behind Prusa as a company.

What can we say? The printing process is not only hassle-free and enjoyable; the prints come out amazing. We pushed the i3 during our time with it and never did it fail to print superbly from small detail oriented pieces to larger more ambitious ornamental models.

Another aspect of the printing process that stood out was how quiet the Prusa i3 MK3S is thanks in part to Trinamic2130 drivers and the ultra silent Noctua fan on the extruder. To nail it home, Prusa has also included a Stealth mode that makes the device even quieter.

Prusa support needs no introduction, and the i3 MK3S continues in that illustrious tradition with 24/7 support through either email or live-chat in a selection of various languages as well as a thorough user guide and even how-to videos made by Jo Prusa himself.

Alongside, Prusa has a knowledge base and forum teeming with versed users eager to help everyone and anyone with any problems they may encounter. Furthermore, the universal praise for the i3 means the internet is peppered with user groups, YouTube channels, and forums designed for owners to congregate and aid each other.

The printer itself ships with a 2-year warranty for the kit version for consumers based in the EU, while the fully-assembled model and for those located anywhere else in the world, the warranty is a 1-year deal.

For those that want to forgo the assembly experience and get printing straight out of the box, Prusa conveniently sells a fully assembled and tested i3 MK3. You do pay upwards of a third more for the pleasure though.

Statistics don’t lie: the Prusa i3 is the most used printer across the globe and with solid reason. We inescapably fell under its charm from the moment the package arrived, and our appreciation for this marvelous printer just grew the more we experimented.

As is the case with all open-source designs, there are numerous RepRap vendors, and the quality of their products wavers considerably from one to the next. With the Original Prusa i3 MK3S, you are guaranteed a quality product that props itself up upon the pillars of the original RepRap while improving upon it with a selection of modern features. In other words, the i3 MK3S is a safe bet and one that gets our backing.

Furthermore, the printer is future proof and fully upgradable to the next MK iteration when Prusa launches it thanks to handy upgrade kits. 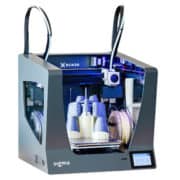