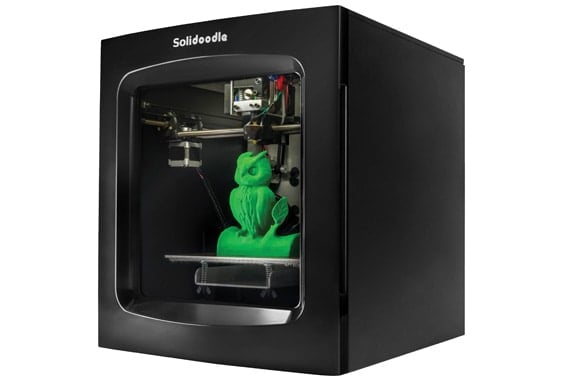 A step forward for the Solidoodle lineage, but one that feels all too underwhelming. The lack of support and wavering print quality seal the deal making it difficult to recommend the Solidoodle 4 to anyone other than technically-minded tinkerers.

The Solidoodle 4 is the fourth iteration of the long-running, but now defunct, low-budget and user-friendly line of Solidoodle printers. It boasts a handful of notable enhancements on its predecessors namely in terms of cosmetics and internal hardware.

Do these changes represent a remarkable evolution in build and performance? We’ve done the grunt work, so you don’t have to, and dived right into everything the final Solidoodle offers makers.

In a departure from the Solidoodle 3, the Solidoodle 4 is a fully enclosed printer in a sleek black finish. It does, however, retain the familiar cuboid shape, LED lighting, and sturdy inner steel frame. The design is quite a deviation from past models, and this is a great thing as the open plan configuration was one of the biggest negatives. As a consequence, noise levels are lowered and ABS printing fares much better thanks to stable chamber temperatures, but it’s a tad heavier at 28 lbs.

It’s more in line with the aesthetic we’ve come to expect from modern 3D printers and gives the Solidoodle the professional allure is was lacking. These upgrades do mean a jump in price seating the Solidoodle 4 in the sub-$1000 bracket.

All sides are mounted with powder coated steel panels except for the front which is now fitted with a see-through plexiglass magnetic door that allows both easy access to the print bed and acts as a protective barrier against the heat producing innards. The top panel is an easy-open lid enabling access to the extruder mount for filament feeding and the like. The spool holder on the back has also been redesigned with a much sturdier frame and perpendicular snap-on mechanism.

Following in the footsteps of its older rivals, the Solidoodle 4 sticks to the classic FDM tech in a Cartesian XYZ axes configuration. The extruder runs along the X and Y axes, while the bed gyrates on the Z axis. The build volume is identical to the Solidoodle 3 and tallies up to 203.2mm × 203.2mm × 203.2 mm.

The Solidoodle 4 uses a single enhanced extruder setup capable of 215 degrees Celsius. A new clamp system on the extruder makes feeding filament and unclogging blockages infinitely easier than previous Solidoodle printers. It can print at layer resolutions anywhere from 100 to 400 microns aided by a boilerplate 0.4mm diameter nozzle.

The heated plate returns with a maximum temperature of 110 degrees Celsius. An internal fan sits inside the interior chamber to ensure adequate ventilation when using notoriously pungent PLA materials. Equally, all the electronics using Marlin firmware are now mounted internally and protected thermally from heat damage instead of sitting on the back of the printer.

Another improvement is the bed leveling process which has been replaced by a tool-less thumbwheel rather than the laborious and difficult to access polyimide tape-covered wing nuts found on the Solidoodle 3.

The Solidoodle supports both PLA and ABS material in a filament format of 1.75mm diameter. Third-party filament works with the Solidoodle 4.

The Solidoodle 4 ships bundled with the open source Repetier Host compatible with Mac, Windows, and Linux that can read STL files before converting them to Gcode alongside scale, resolution, rotation, temperature controls, and print triggering options. The printer is also compatible with all manner of open-source slicing software like Simplify3D and similar alternatives.

The printer comes fully-assembled, and the only installation step is piecing together the filament holder and snapping it to the back of the machine. Calibration amounts to an easier task than previous Solidoodle models thanks to revised thumbscrew mechanism, and Repetier Host providing the extruder points to measure distance via the tried and trusted paper method.

Although getting the Solidoodle 4 to print is markedly more straightforward than the touchy Solidoodle 3, producing a decent print is still subject to quite a lot of tinkering especially with calibrating the axes and bed, adjusting temperatures, and changing settings in Repetier Host.

This isn’t necessarily a negative but with Solidoodle sprouting marketing spiel about the Solidoodle 4 being the easiest in the range to use, seems somewhat misplaced. Tinkerers who appreciate the process of fine-tuning a machine will have an amazing time but first-timers attracted to the bright lights of home 3D printing are in for a bit of a wake-up call.

When the Solidoodle 4 does print without issues, the quality hasn’t improved all that much. The results are of decent quality but are still prone to layer issues, bloating, wavering detail quality, banding, and trouble with overhangs. It did, however, occasionally produce models that we were completely satisfied with and were hard to judge negatively.

Another contentious point was the new spool holder which was supposed to confine feeding issues to the past. In reality, the new mechanism is an improvement but brings with it a host of new problems namely due to the rod being smaller than the hole in a filament cartridge; this means the cartridge can shift horizontally causing a fair few tangles during our tests and, if left unattended, could result in failed prints.

The Solidoodle suspended operations back in 2016, and as such, there is no official vetted after sales support or warranty request system in place. Specific retailers might offer alternative support options so best to check directly with them at the time of purchase.

As for enthusiast help, the Solidoodle range has spawned a vibrant community that not only excels at assisting flailing first timers but also offers an array of potential upgrades you can make to improve the performance of the Solidoodle 4. The Soliforum is a marvelous first stop. Otherwise, common destinations such as YouTube and Reddit also host a treasure trove of guides, troubleshooting articles, and enthusiast discussions.

The Solidoodle 4 is unquestionably an improvement on the Solidoodle 3, but in our eyes is more of a Solidoodle 3 2.0 or 3S rather than meriting a numerical jump. The changes are good but aren’t enough to pique our appreciation of this printer as anything more than respectable both in terms of build and performance.

As above, this is a tinkerer’s machine for those with a level of comfort experimenting with narrowing down the best settings for a quality print. Equally, the Solidoodle 4 is ripe for numerous upgrades that only a hands-on hobbyist should consider. Novices and educational users will end up wrestling too much with the quirks of this printer to make it a viable option. 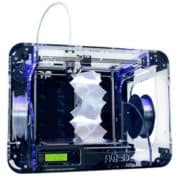